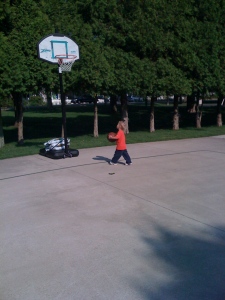 This photograph just reeks of optimism, doesn’t it?  Sam couldn’t have made that shot in a million years, but he was eager to try anyway.  Sort of like this picture there is an endearing story of optimism told about my brother, Craig.  Being rather busy and full of life, sitting still was not his forte.  My oldest brother, Jeff, could draw fighter jets and write his name at two years old, but Craig was often described as a tornado, tearing happily around the house from one thing to the next.  Maybe it is not surprising then that, for Craig, those first years of school were a little challenging.

Yet one night at the dinner table, Craig was excited about sharing some big news.  “Mom, Dad,” he exclaimed proudly.  “Guess what?  I’m the best reader in the slow reading group!”  I love that story.  And I’ve often thought, “That’s the kind of kids I want to raise — kids with a sunny outlook, kids that would be so easily elated, so willing to see the positive side of things that they could be proud to be the best reader in the slow reading group.”

But having mothered little Will Jackson for nine years now I am amply aware of how little influence I actually exert over his personality.  The idea of him making a declaration like Craig’s is laughable.  He has a natural drivenness and work ethic that is wholly incongruent with celebrating small victories.  Instead, he takes things too seriously — ever a harsh critic of his own performance.

Yet Will also has the sweetest, most tender disposition of anyone I know — since he was a very small child he has been in tune with other people’s feelings in ways that are just inexplicable.  For example, one morning when Will was just three and starting school, we saw a friend of mine, Jamie, at drop-off.  To my amazement he left my side and went over to Jamie.  He gave her an unsolicited hug and told her that he loved her.  He had never once done anything like that before, and was quite shy and reserved as a three-year-old. But what made this tender moment truly remarkable was that, although Will had no way of knowing, Jamie had just experienced a death in her family.

Isn’t interesting, that as parents, we have certain preconceived notions about what we would like our children to be?  For some people it might be an athlete, for some it might be a musical prodigy, others may have dreams of their child being a missionary or a nuclear physicist.  For me, I was just hoping to raise a glass-half-full kind of person.  But it’s as if God has said, “Kristie, will you stop?  I know what Will needs to be.  I’ve got just the right personality, just the right combination of giftings and challenges for him to accomplish my will for him.  Will you let go?  Point Will to me, love him unconditionally, wait and watch.  You don’t need a plan.  You just need to trust my plan for him.”

And as He says this, He gently loosens the grip I have on Will’s life.  It’s silly to hold on so tight when I know He knows better.  Yet my propensity for attempting to control is stubborn and this exact conversation and grip loosening will undoubtedly happen again and again and again over all three boys.  May I always be willing to open my hand and to answer, “Yes, Lord, I trust you.”