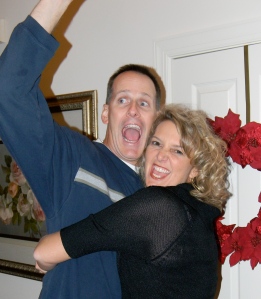 Today is my husband’s thirty-ninth birthday.  Obviously there are many things that I love about Will — but one attribute that I feel is quite uncommon is his utter abandon in situations others might find embarrassing.  For example, when we were in college he had a sure fire way of brightening my day.  He chased squirrels.  I don’t know precisely how this began.  I think maybe some squirrels were somewhat aggressive on campus and he shooed one away one time.  I must have laughed at my six-foot-four boyfriend chasing the itty bitty fur ball around.  But he has always been willing to go to extremes to make me laugh, and I love that.

One day long ago, well before 9/11 when you could go through airport security to meet people at the gate (doesn’t that seem like the weirdest thing to do now?), we ran into a woman who was meeting her husband.  We were making a connection in this airport, but we knew this couple that lived in that city.  Such a small world sometimes.  Anyway, we knew them, but not well.  Not well at all.  Yet when this gentleman came walking off the airplane, Will declared that he was going to hug him.  The wife didn’t know what exactly to make of that, and so Will quickly made his way over to this unsuspecting man and gave him a bear hug.  He wouldn’t let go of him, the man, who was about seven inches shorter was just stuck in Will’s armpit clearly bewildered about what was going on, and so the wife started awkwardly yelling out, “It’s Will!  It’s Will!”  I can barely type this out because the memory of it is so funny to me.