“You look mahvelous” was the tag line of Billy Crystal’s Fernando character on SNL.  What made that bit funny, is what often lends humor, it’s partially true: we do long to look mahvelous.

I mean honestly, who doesn’t want to look mahvelous  I do not wear makeup everyday and l often arrive at my destination with wet hair. But just because I don’t spend an inordinate amount of time trying to beautify on a daily basis, the truth is I want to look mahvelous just as much as Fernando or anybody else.

But did you know that the Bible has a prescription for looking mahvelous?

Psalm 34:5 says, “Those who look to him are radiant, and their faces shall never be ashamed” (ESV).

I got my toes done this week, and I bought new eyeliner. I got a cute new jean jacket too. But the best thing I can do to look radiant is to gaze at my Savior. Nothing else is required — just beholding Him.  May I do so daily. If I can reflect an infinitesimal fraction of His glory, I’ll look mahvelous, darling.

And so will you!

Have a fabulous, even mahvelous, week!

It’s snowing again in Northern Virginia, but the signs and promise of Spring are not undone by a powdered sugar dusting.  Today is the official start, no matter how white the landscape!

I received a birthday card this week.  Yes, my birthday was back in January, but that day was a little hectic.  My older son had a basketball game about fifteen miles from home — which is further than it sounds with DC traffic.  It feels like a hike on the weekend with light traffic, but this was a Thursday night.  A victory and a stop at Krispy Kreme on the way home made it all worthwhile.  Will, Sam and I, along with pretty much every family from both teams, made the stop.  I mean the sign was lit.  How can one resist hot Krispy Kremes?

By the time we got home it was already nine o’clock.  My husband and Nate had returned from a different, more local basketball game.  A friend and her three sons were there too. The eight of them sang happy birthday and we had hot donuts and Pralines and Cream ice cream cake from Baskin Robbins.  Yes, six boys infused with more bedtime sugar than is at all wise. At some point, little Will said, “Mom, I made you a card, but I don’t know where it is.”  And I didn’t think a thing of it.  But this week, he came and handed me the card he found in his less-than-immaculate room, and smiled his melt-your-heart smile.  Yes, he is my son, but I truly believe the child has been given one of the most magical smiles God has ever bestowed.

The card is not fancy, and only contains a few sentences.  But one phrase really touched my heart.  He wrote, “I think you are the best forgiver in the world.”  Now, I need to tell you that I’m really not.  You hear about people who’ve forgiven their child’s murderer, or other offenses that seem impossible to forgive.  By God’s grace, that’s not my story.  My son wasn’t referring to anything profound. I think he thinks I’m just good at day-to-day forgiving.  But maybe that is profound.  It’s certainly a lovely compliment to receive on your birthday, or in this case, two months later.  And I do often tell my sons, when things go south and so that means often, that God’s mercies are new every morning (Lamentations 3:23), and so are mine.

Receiving a sincere compliment gives you immediate motivation to live up to it.  So what makes someone a good forgiver?  We have the ideal model of forgiveness woven throughout the Bible.  David poetically said that his sins were forgiven as far as the east is from the west (Psalm 103).  Jesus taught us to pray about forgiving others as we are forgiven (Matthew 6), which makes forgiveness like so many other aspects of spiritual life:  you can give it, because you’ve received it.

When you stop to think about all you have been forgiven, it humbles you, softens the posture of your heart toward others, dissipates any inclination to judge or condemn.  A grateful heart that knows forgiveness can hardly help but forgive.  It’s the way God designed it.

If I want to be the world’s best forgiver, at least in my son’s eyes, then I need to regularly acknowledge all I’ve been forgiven.  It’s there in that humbled, grateful state-of-mind that I can be the person my handsome, winsome boy thinks I am.

Lamentations 3:22 says, “The steadfast love of the Lord never ceases; his mercies never come to an end.”  May the steadfast love that we daily receive allow us to love our families in the same way.

Thanks for reading!  It means so much. 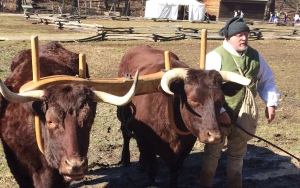 I skipped posting last week because Friday was the third snow day of the week, and I had committed to a speaking engagement for Saturday.  I spent the day trying to go over my talk, and saying to Sam over and over again, “Yes, you can play another game of Wii.”  I could feel guilty about that I guess.  I think he set a screen time record that day.  But I just don’t.  Ecclesiates 3:1 says there’s a time for everything, and last Friday was a time not to blog, and a time to not feel terrible over screen time.  Sometimes we really need to give ourselves some grace.

Anyway, my boys have gone to school every day this week.  As in all five days.  Can I get an Amen?  This is the first occurrence of five days in 2015.  Yes, it’s been a season of starts and stops and getting less done than planned.  Notwithstanding last Friday, I am pretty good at dropping everything and going sledding or giving my full attention to my sons because they happen to be home, AGAIN.  But honestly I know I am not alone (there are thousands of us), who do appreciate a full week of school now and then.

Yesterday was a lovely spring day, cool and sunny, and I chaperoned a field trip of second and third graders to Mount Vernon.  It was delightful to walk around Washington’s beloved property.  It is an undeniably beautiful spot, and the home itself with sixteen foot ceilings, windows galore, and thirteen fireplaces is pretty darn nice too.

But we didn’t just tour the home, we spent some time down by the river’s edge where they have a “Pioneer Farm.”  This is where I snapped the picture above.  This farmer was explaining the purpose of the yoke and demonstrating how the oxen work together as a team.  He said, “It simply keeps them together.”

His words struck me with the force of a two-by-four, because Jesus said:

Come to me, all who labor and are heavy laden, and I will give you rest. Take my yoke upon you, and learn from me, for I am gentle and lowly in heart, and you will find rest for your souls. For my yoke is easy, and my burden is light.  Matthew 11:28-30

The Mount Vernon farmer said the purpose of the yoke above is simply to keep the oxen together.  Could it be that simple for us?  I think it is.  And now I have such a vivid picture of these oxen working together.  One went left, the other went left.  One went right, the other right.  They went forward and backward together.  It is so simple!  May I put my stubborn, silly head in that yoke each morning and let Jesus lead the way.  He is gentle and loving, and He makes my burden light.

Praying that I will stay together with Jesus by willingly and continuously putting on His yoke.  I know for sure that He will never steer me wrong, and I hope that you know that too.